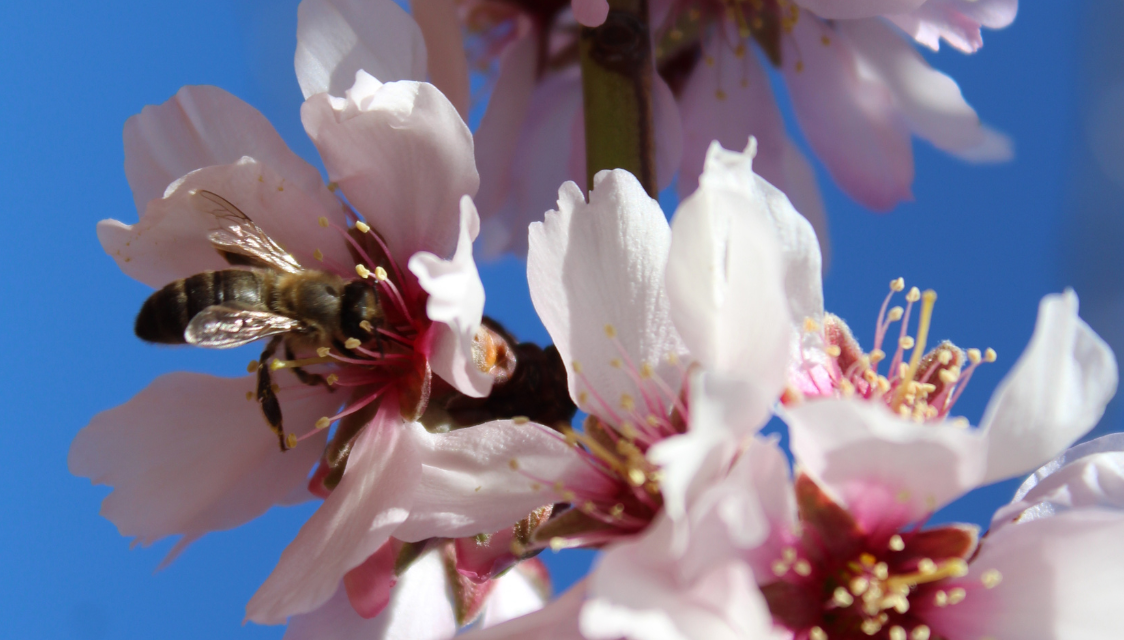 Climate change anticipates the most anticipated natural spectacle of spring and exacerbates the risk of bee mortality.

The almond tree is one of the first fruit trees to flower, an event that happens earlier in the calendar every winter. This is why this tree has for decades become an indicator of climate change that has alerted experts.

Caused by increasingly warmer winters, their flower burst is being brought forward by up to a month from its normal time and this leads to poorer quality production, if not complete crop failure. With an added danger for their pollinators, the bees, which are forced to interrupt their winter rest and suffer from exhaustion due to overexploitation.

Like the perfect spring rebirth, at Finca Chirlata the almond blossom was expected to reach its peak at the end of March, given the different varieties of the fruit, including some late varieties such as Guara, Marta, Antoñeta, Ferragne or Constanti. But for years the trees have been bringing this stage forward, reaching their earliest flowering in 2022: a fortnight.

In popular parlance, the saying “the almond tree is in blossom and the weather is good” predicts warm temperatures that help the fruit to germinate once the petals have fallen. However, climate change is causing abnormal winter days of 20°C and dangerous temperature drops in the first weeks of spring. The prunus dulcis is able to withstand temperatures as low as -5°C but can withstand frost very badly, because it can vegetate but not produce fruit.

Flowering is a long awaited phase for Chirlata almonds. When the first flowers appear, the timer starts and in little more than a week they go from being beautifully filled with white and pink to losing their petals.

The joy is as short-lived as the event itself, giving way to fear of late rain, cold and snow that can completely ruin the harvest.

Exhausted bees
Trees are not the only ones to suffer. Climate change also threatens bees, on which almond trees are 90% dependent for pollination.

Every year, Finca Chirlata receives 40 beehives as guests, which it pampers and cares for with an eye to the agro-phenological reports of the State Meteorological Agency (AEMET). These insects are fighting against extinction caused bylack of fooddue to drought and global warming, by pollen poisoning from pesticides and pesticides used on most crops, and also by overexploitation.

The function of bees is a free service that is mercilessly abused by humans. In particular, almond pollination is particularly strenuousbecause, on the one hand, it forces the insect to interrupt its winter rest months earlier than expected in order to attend to the early blossoms. On the other hand, the sudden rise of “more sustainable” products on the market, such asalmond milk, disrupts their natural production rhythm.

International animal welfare organisations have been warning for years about the threat to bees, denouncing irresponsible and unethical practices in the agri-food sector, and encouraging the reduction of the dangers to these pollinators by using non-invasive and truly sustainable methods on crops.

Chirlata almonds, organic label
Sustainability is at the root of the Chirlata family business. The almond trees are cultivated following a traditional agricultural model, using only natural fertilisers, without pesticides or pesticides, with drip irrigation from a natural aquifer from the Sierra Nevada, and using solar panels as an energy engine. Since 2007, Chirlata almonds have been certified by Kiwa organic production and have been awarded the European Union’s organic farming seal.

Any action, no matter how small, that reinforces this ecological commitmentis added to the production model, such as the use of natural recyclable packaging or the optimisation of shipments in online orders to reduce CO2 pollution.

Experience flowering in Chirlata with the five senses